We should test drive this idea. I’d prefer to be able to slowly experiment with big new changes so the community can experience something firsthand. Not sure how many of us have actively used Aragon — I’ve only played with the one @misato set up.

For those in the yearn community that have used Aragon I’d love to hear your thoughts.

What area of governance could we break off to put in an Aragon DAO now?

We could run the Delegated DAO Vaults in Aragon when they are ready perhaps?

I had a chance to think this through a lot before I formed my conclusion, and ultimately I am strongly opposed to this proposal. For a few reasons:

Alternatively, in an effort to increase decentralization I would support increasing the multi-sig member count, but even at this moment I don’t think this is warranted and the multi-sig appears to be working as intended. Since the multi-sig can veto any Aragon Court action, you have to wonder what benefit does Yearn get then if the multi-sig still has the final say?

In short, it adds an additional layer of complexity, trust, potentially fees. Aragon has much more to gain to this, and since the multi-sig still retains veto control, not sure the utlimate benefit Yearn really gets.

I support no changes to the current governance/multi-sig model. If there is evidence of faults or breakdowns we can reassess.

I support not changing governance.

I hear so many arguments here vouching for governance a a library versus governance as a service and while I kind of agree I think you may be confusing the role of Aragon here.
The core Aragon governance tools are free to use and can be adopted like a library, and on top of that (optionally) Aragon Court provides dispute resolution as a service.
The court is only needed here as a trustless bridge between snapshot voting and on-chain execution. If you guys want to do the voting on-chain then there is no need for the court, although it can still be used for protection against 51% and other threats.
In the future we may be able to do the offchain bridge with some wizardry like zk-rollups but in the meantime the best way to do it practically is by leveraging the Aragon Court.
It would drive more investor confidence if the governance process could be fully decentralized in the hands of the token holders instead of a multisig.

sorry for the radio silence. It has been a busy couple months in Aragon land. We have most definitely not forgotten about yearn and we are still very much looking forward working together.

We took a lot of the feedback here (along with the one received from other key users and partners) and made some big decisions such as rebuilding our entire smart contracts system or discontinue Aragon Chain. A couple weeks ago we released a developer preview of Aragon Govern, the core smart contract system in Aragon 2. Aragon Court got a lot of improvements and it is being relaunched as Aragon Protocol, using ANT as its staking token (higher market cap, more security)

This is the new, simpler, Aragon 2 (tweet-sized explanation): 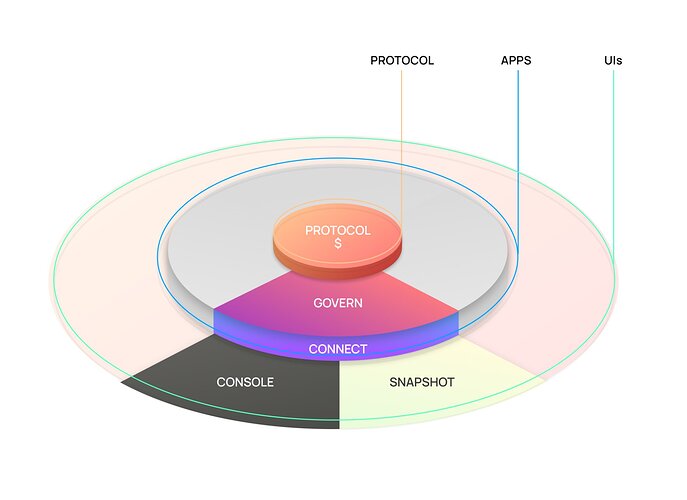 Keep in mind that we are still weeks from release and the pieces are still being polished and coming together, but a cohesive experience is quite close.

We are in contact with @tracheopteryx and we are very close to being ready to demo the community on how a yearn DAO could run on the new stack.

Very excited to see the demo and looking forward to how the new Aragon Govern can help governance with yearn.

I think this thread should be archived. I read though a bunch of it to find out in the end it’s all moot. And a whole new system will need a new proposal