Establish who votes in Curve DAO on behalf of Yearn

This proposal establishes which group votes in Curve DAO on behalf of Yearn.

Decide who to delegate the voting rights to. The proposed options are:

After launching yveCRV vault, Yearn has increased voting weight in Curve DAO from 2% to about 5%. From Curve DAO perspective Yearn is a single agent, so we need to align our decisions before casing a vote there.

Right now we can vote on Proposals and Gauge weights. We can either delegate both or establish some model for voting on weights and just vote on proposals.

Not voting is not a good option, since our voting power might actually affect the proposals reaching quorum.

I can’t speak for the ape.

But as I understand the spirit of the ape when it locks its CRV into the Backscratcher vault, is that it says “What’s most important to me is to get a return on these damn CRV, everything else be damned”

So any governance voting power stemming out of this action, should be channeled into this spirit: Make more money for the ape.

That means essentially protecting their investment, their CRV are forever locked, so ensure curve is paying out as much returns as possible to this vault should be the mission for governance voting.

This could be actioned in many ways, not sure which one is best. So I’d opt for whichever is the simplest and easiest to maintain over time.

Delegate to Yearn Multisig looks like the best option here.

YFI holders voting every time via Snapshot would be hectic. And I think the purpose of YFI holders is not to govern Curve DAO.

And not the Liaisons group option because there will be another group that needs to co-ordinate and communicate with the broader Yearn community. So, that would be kind of unnecessary.

yveCRV holders is ok but I doubt there will be active participation from them, as there would probably be a need for another interface or something of that sort needed for them for this purpose and this would probably complicate things a bit. Though this option looks like the second best IMO.

And not the Curve team because that increases their voting power and reduces decentralization a bit. Of course the Curve team thinks best for CurveDAO but I think out of all the options, Yearn multisig is the best and I will be voting in favor of delegating to the Yearn multisig.

We have discussed at Curve here, and I think we would like to see the following, ideally:

IMO there’s a clear trade for yveCRV depositors: depositing CRV for a multiple on fee revenue claims (versus direct deposit) in exchange for delegating voting power to Yearn, with the implication that that voting power is used to maximise mutually beneficial outcomes for the Yearn protocol in its interactions with Curve.

I’d suggest that YFI Holders vote on a yveCRV Policy Statement (e.g. maximise yields for Yearn Vaults that leverage Curve) via Snapshot, and then the Yearn Multisig votes in accordance with this Policy Statement.

This minimises the voting burden for YFI Holders and delegates Curve-level voting on gauge weights and relevant proposals to those intimately familiar with the Curve and Yearn protocols and their interactions.

For Curve Proposals that do not clearly fit within the framework defined by the yveCRV Policy Statement, these can be bubbled up to YFI Holders for a Snapshot vote.

I propose voting for gauge weights proportional to how much we have in them. 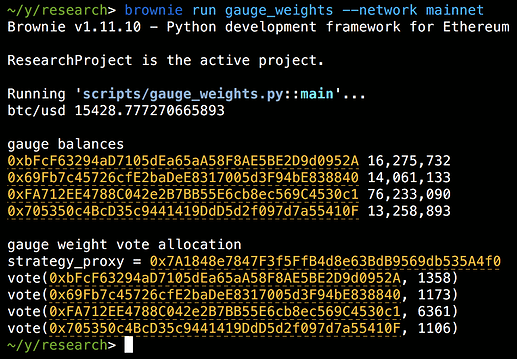 What about weights based on a target apy? If you vote proportional to the gauge balance, the highest ones will continue to receive the most votes and thus, not really cause an equilibrium of yield in all vaults.

But if we set a target APY, say 20%, one could then base the votes where they are most effective. This would in turn drive the vault apy up across the board, and hopefully increase yearn’s AUM as a result.

I could also see the voting based on an “effectiveness” parameter, where each gauge has a calculated effectiveness of voting 1 veCRV. 1 veCRV spent voting in 3pool (highest liquidity) has a much less effect than say a vote in the bUSD pool, for example.

Not in favour of voting. Voters don’t have time or inclination to care especially on weekly basis.

Problem with weighting by pools is new pools won’t emerge. The incumbent will always continue winning. Which might be fine for stablecoins but bitcoin (and later ethereum? and certainly anything new in futre) will get left behind. And bitcoin yield is important for Yearn. Unless plan is to collateralise and give up on BTC pools direct.

In favour of 2. Yearn multisig.

Not sure I fully understand this, we give our votes to veCRV holders? How does this work?

We can either delegate both or establish some model for voting on weights and just vote on proposals.

I wouldn’t mind letting the yearn multisig vote on gauge weights, but I think YFI holders should vote on curve proposals via snapshot if they are important / effect yearn.

I don’t think this is necessarily true. There will still be lots of other veCRV out there that can sway votes directly on Curve.

Also, weighting by TVL in respective yVault means that capital gets to vote. If there’s a new pool that lots of people want to join, now instead of voting with veCRV on Curve, they can vote with capital on Yearn. That’s pretty damn cool, and opens up a new paradigm for how gauge weights are determined.

Personally, I’m for letting the Multisig decide—voting as YFI holders would be too complicated. However, I like the idea that @undefinedza laid out of YFI holders voting on an outline of what the Multisig should vote for.

Furthermore, I really like the starting template of gauge weighting votes based on Yearn’s pool TVL. If Multisig or governance wants to change then we can, but I think it’s a good place to start.

This is an interesting suggestion.

A dedicated group of people who are elected to specifically follow developments in the apps making up yearn’s vault portfolio, and charged with the responsibility of being liaison to those teams, making proposals, and voting in ways that benefit yearn - that’s pretty cool. And you might require the DAO liasion group to be held accountable by holding regular elections. Make them demonstrate that they are getting results, or else maybe someone with a better track record or resume might end up replacing them.

I think that’s the most effective way to make the most out of the Curve voting power you have. It’s the most concentrated way you can get Curve to move in the direction you want to see it move. It’s early days still so it might not seem like the votes have much impact on yearn, but things can develop faster than any of us are prepared for. The decision on how you handle the voting power now will have enormous repercussions on how much influence yearn can exert in DeFi down the road.

The multisig is a good proto- DAO liaison group, but it would be far better to make something with an explicit and sole purpose of that role, which is a big job in itself.

Furthermore, I really like the starting template of gauge weighting votes based on Yearn’s pool TVL. If Multisig or governance wants to change then we can, but I think it’s a good place to start.

For gauge weight votes, I agree with this. Vote with capital

There is also the possibility now for people to swap in and out of veCRV purely for voting.
I like the idea of YFI holders voting, but I hear the concern that it might be burdensome to keep up with this for all YFI holders.

I might then be inclined to give it to the multi-sig. They know the backscratcher and better understand the effects of the votes on it. giving them voting power does not restrict them form setting up internal polls for votes that they feel not completely comfortable casting votes for others on.

Similarly, does Yearn multisig really have the time to deal with our governance?

From experience, I think the answer is no (running one DAO is hard enough as it is) which is why @michwill solution makes more sense long term.

A dedicated group of people who are elected to specifically follow developments in the apps making up yearn’s vault portfolio, and charged with the responsibility of being liaison to those teams, making proposals, and voting in ways that benefit yearn - that’s pretty cool. And you might require the DAO liasion group to be held accountable by holding regular elections. Make them demonstrate that they are getting results, or else maybe someone with a better track record or resume might end up replacing them.

This sounds good to me. I think the multisig already has a lot to deal with.

I support the multi-sig voting and will trust they will vote that is in best accordance with the wishes of overall governance.