Extend Multi-sig powers by another three months until end of May 2021 whilst an in-progress replacement proposal matures further.

If adopted, this proposal seeks to extend the existing Multisig empowerment as was established by YIP-41[1] for another three months until May 24 2021. This is done in order for a currently in-progress governance architecture proposal to mature further, and ultimately have longer time to be discussed in the community, prior to it being proposed.

The existing mandate expires on February 24 2021. As is stated in YIP-41, the Multisig was empowered for rapid decision making until the protocol transitioned to a “multi-DAO structure”. A plan to decentralize power away from the Multisig, led by @tracheopteryx, is in-progress of being finalized. It has been delayed due to recent Governance activities.

The three month extension would be used to introduce the proposal to the wider community, iterate on it further to incorporate feedback, without being rushed by the somewhat arbitrary deadline that the mandate expiration sets.

One alternative would have been to instead publish the current draft of the proposal as is, and hurry to have it adopted by YFI voters before the existing empowerment expires on February 24. The outcome of this process is uncertain. It is likely to result in a less mature YIP being adopted, if one is adopted at all.

Another alternative would be to let the Multisig mandate expire, and be replaced by some other Governance alternative. It is unlikely that a feasible alternative solution could be devised, proposed, and finalized in the little time that remains before expiry.

I propose to bundle multisig rotation with this proposal. While I’m happy with the participation rate of everyone, you can vividly see on the chart below that it’s been mostly me and @milkyklim preparing and executing transactions.

I’d like to see broader representation of the wider community on multisig. There are at least two groups which often need to submit transactions to the DAO which I think need to be represented more, Strategists and Core Devs. So far their solution has been to create a Dev multisig and Strategist multisig. This is a part of the upcoming proposal which gives wider autonomy to the different groups formed while building Yearn.

What’s important about these groups is they have good technical understanding of how the tx submission process works and can craft complex transactions. If possible and if they accept, I’d nominate @fubuloubu to represent Core Devs and @SamPriestley or @poolpitako to represent Strategists.

Being a signer is a demanding public service. If any of the signers feel fatigue and would like to be rotated, please speak up. I’ve collected some stats below on ychad.eth, which has celebrated nonce 300 just today. 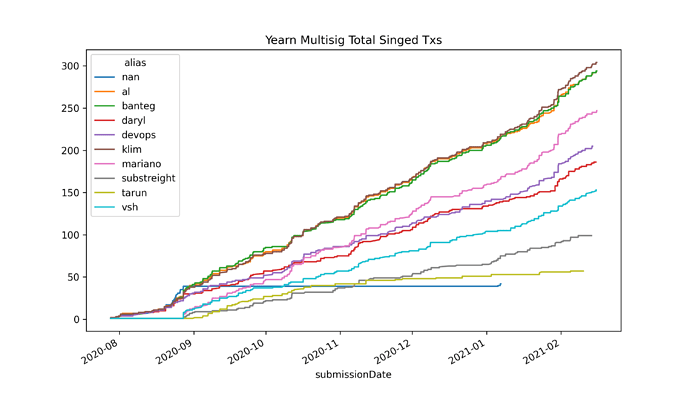 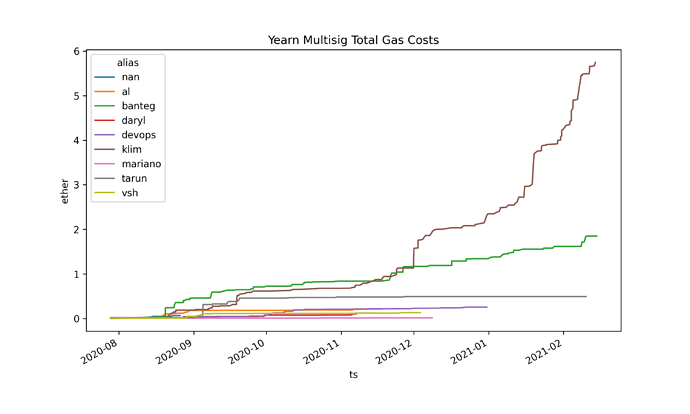 The budget below was provided with YIP-41 and helped the proposal pass. Is it possible to update this with actual costs incurred since September? Bonus points if transactions are verifiable 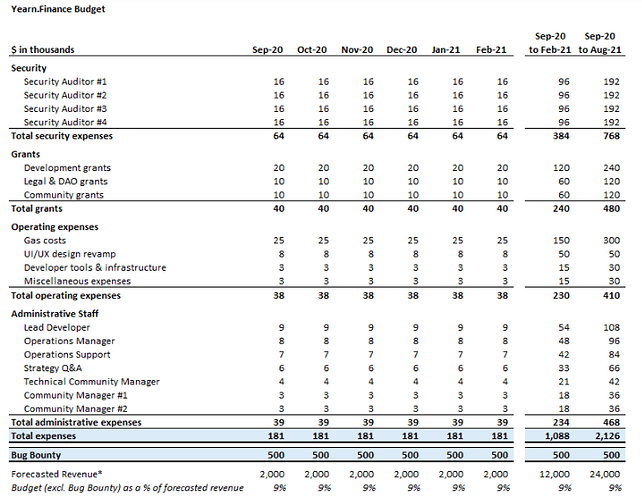 Q4 is in progress.

Happy to help with aggregating transactions into accounting-readable format. Will reach out on telegram

What was your actual cash flow / balance sheet for the last few months? This is all past data and is only a budget. What actually happened? These numbers are all the same and all guesses as to how much yearn might spend each month, not actual data. I would REALLY appreciate some REAL INFO- thank you <3

I’m shocked by the amount spent on gas. Shouldn’t really surprise me, but still…

@cloudava, the data is being compiled as we speak

I don’t provide a lot of value as yearn multisig member: basically, I just do my best at checking and validating the txs before signing, but I am not capable of actively proposing and participation. Replacing me with a person that is more involved with yearn but just as secure is a rational move, unless the community would prefer a neutral party (not part of core team) in that position.

Note that this is not a resignation - I am perfectly capable and willing to continue in my current role.

A quarterly financial report was shared previously and the next one will be published following Q3 '21.

At what point are we able to give our thoughts on the proposal being drafted?

This is a question for Trach, who’s been writing it. It has already been shared in some working groups, you can reach out to him and ask for a sneak peak. I’m guessing it would be ready to be shared more widely in a matter of week(s).

Agreed. That is the very motivation for why this extension is being proposed - so that there’s ample time for feedback and iterations before something as important as a Governance transition is voted on as a YIP.

Could the multisig explain with more details why did they delay such important development (DAO transition) up to the point where they now need three months more (an increase of 50% of the original time given in YIP-41) to finalize it? To my eyes, the excuse given (“recent” governance activities) sounds like one that some of my alums typically give when they forgot about a project that they have to deliver before a specific date. It’s obvious that the minting drama came in January with a lot of governance work where @tracheopteryx played a central role, but the multisig was empowered back in late August and there was plenty time to solve this issue (even more given that DAO transition was one of the main assignments entrusted to the multisig by YFI holders together with operational decisions). Given the personal situation of @tracheopteryx (that obviously limited his time dedicated to yearn’s issues) and his prominent role in latest governance drama, why didn’t the multisig do anything to finish their assignment on time by delegating the dao transition in the shoulders of someone else that isn’t already working too much? Now we’re here, 1 week before the time originally given expires (totally consumed by the minimum of 3 days discussion on the forum + 5 days for the snapshot) and having to decide between giving more time to this multisig or … chaos?

Voting is live on Snapshot:
https://snapshot.page/#/yearn/proposal/QmdRCXH6BQpNcucoZqAtS5hQKjckE2428qiZoWjxmJXbs3

I’m sorry I wasn’t able to better manage the time on this. I spent a lot of effort on it last year and really didn’t make good enough progress. A lot of other people have put in good work too. I take full responsibility for the delay.

And I stand by the delay. Things don’t always go the way we want and we have to make the best decisions we can. Delaying a few months doesn’t matter in the scope of things. This stuff is critically important for yearn. Our governance needs a ton of work, I felt it was better to wait than rush.

BABY and then the Mint were unexpected and took an absolutely staggering amount of time and energy. Could someone else have taken over on the multisig transition? Sure, literally anyone could permissionlessly. Could I have handed my role on the ongoing effort off to someone else? Yes, but I didn’t want to.

I want to see it through. I think it will take much less than 3 months, but it’s nice to have a safe margin to work in. My plan is to share out an overview of the ideas as a discussion on the forum in the next week or two. Rather than lead with a proposal, I want to write up everything we’ve been thinking and have us all think through it together.

Then we as a community can turn it into a proposal, using similar collaboration system to what we’ve been developing with the mint and website: multiple telegram groups and forum discussions.

To sum up: I’m sorry, sincerely. This delay is on me. I hope to make it up to the yearn community by helping revolutionize DAO governance.

I can relate. I feel much comfortable and better, right here, right now.
The multi-sig empowerment set the consolidation of fundamental foundations.
We would need one plan to protect against multi sig private key loss.

Hi. Is there any update? I have read about progress on delegated voting, and on coordinape, but since an extension was given, accountability should be requested as well. Not saying people are not working their assess off, which i know they are, but weekly updates and a public time plan would be ideal.

Can any one deliver these 2 things?

and here it is: https://gov.yearn.finance/t/governance-open-thread

This topic was automatically closed 7 days after the last reply. New replies are no longer allowed.